This shot was taken the the "Mont Saint Michel", part of the UNESCO list of World Heritage Sites.
Every year, it remains one of the most visited sites in France, after the Eiffel Tower.

This shot pictures the Archangel Micheal in one of his appearances to Aubert of Avranches, bishop in the 8th Century.
Legend has it that Saint Aubert had a few visions of the archangel, requesting for the building of an oratory on the rocky tidal island that will become Mount Saint Michel.

After a few visions, Saint Aubert had no choice but to fulfill Saint Michel's instructions… after being dug a hole in the skull!

If you come to France, or if you live in our country but have never gone to Mount Saint Michel, I can only advise you to do so (and take the steps way, avoiding most of the tourists going up on the "road").

Have a great week! 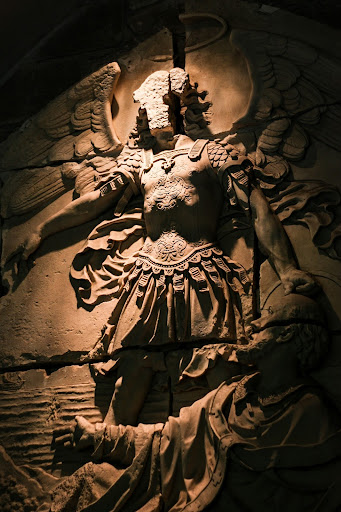 5 réflexions au sujet de « For once in this series for Sacred Sunday, I will stay in France! »